In this post I will show you how to run an R script on heroku every day. This is a continuation of my previous post on tweeting a death from wikidata.

Why would I want to run a script on heroku?

It is extremely simple, you don’t need to spin up a machine in the cloud on AWS, Google, Azure or Nerdalize. You can just run the script and it works. You can even make it run every day. Heroku does not support R out of the box. So you have to tell heroku to install R (they call that a buildpack).

What do you need?

I combined information from this medium post by Dave Quartey and the description of the buildpack that Dave refers to in that post.

For this to work you need two scripts:

Heroku works a bit like github. You download and install the heroku command line interface (CLI) and then you can tell heroku what to do, and what scripts need to be moved to heroku.

Setting up your project

I’m assuming you’re starting out in a fresh folder with only your script in it.

Make a script called init.R and modify it to install packages:

In the folder you have now 2 scripts: init.R and your original script.

this will create a app with a random name, if you want to control the name type heroku create NAME

To make this heroku app run every day you need a scheduler. Go to the heroku website and install it in your app, or use the command line.

Before you do, you have to add a credit card to heroku, if you use heroku a lot it will cost you money.

It says something like run or it has a ‘$’-sign and a white space after it. This is what I used (my script is called runtask.R): Rscript app/runtask.R.

It took me a while to find out where the script was in the app, but apparently it is in the app directory.

And this is what it does: 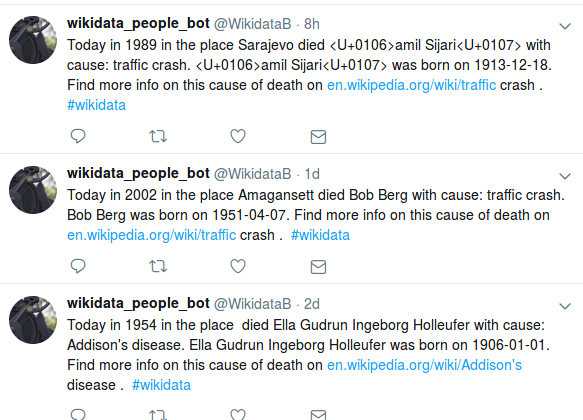 screenshot of past few tweets

Let me know if you succeed!

You can find the sourcecode for both projects in: https://github.com/RMHogervorst/tweetwikidatadeaths