In this explainer I walk you through the steps I took to create a twitter bot that tweets daily about people who died on that date.

I created a script that queries wikidata, takes that information and creates a sentence. That sentence is then tweeted. 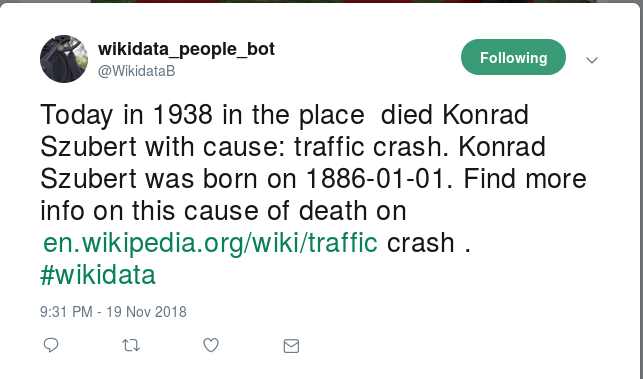 A tweet I literally just send out from the docker container

I hope you are has excited as I am about this project. Here it comes!

You might wonder, why people who died? To which I answer, emphatically but not really helpfully: ‘valar morghulis’.

1. Talk to wikidata and retrieve information

I think wikidata is one of the coolest knowledge bases in the world, it contains facts about people, other animals, places, and the world. It powers many boxes you see in Wikipedia pages. For instance this random page about Charles the first has a box on the right that says something about his ancestors, successors and coronation. The same information can be displayed in Dutch. This is very cool and saves Wikipedia a lot of work. However, we can also use it!

You can create your own query about the world in the query editor. But it is quite hard to figure out how to do that. These queries need to made in a specific way. I just used an example from wikidata: ‘who’s birthday is it today?’ and modified it to search for people’s death (that’s how I learn, modify something and see if I broke it). It looks a lot like SQL, but is slightly different.

Of course this editor is nice for us humans, but we want the computer to do it so we can send a query to wikidata. I was extremely lazy and used the WikidataQueryServiceR created by wiki-guru Mikhail Popov [@bearlogo](https://twitter.com/bearloga).

This is the query I ended up using (It looks very much like the birthdays one but with added information):

Try this in the query editor

When I created this blog post (every day the result will be different) the result looked like this:

The query returns name, year, cause of death, manner of death (didn’t know which one to use), place of death, country of citizenship, country of birth and date of birth. I can now glue all these parts together to create a sentence of sorts

2. grab one of the deaths and create a sentence

I will use glue to make text, but the paste functions from base R is also fine.

These are the first lines for instance:

I created the twitter account wikidatabot and added pictures 2fa and some bio information. I wanted to make it clear that it was a bot. To post something on your behalf on twitter requires a developers account. Go to https://developer.twitter.com and create that account. In my case I had to manually verify twice because apparently everything I did screamed bot activity to twitter (they were not entirely wrong). You have to sign some boxes, acknowledge the code of conduct and understand twitter’s terms.

The next step is to create a twitter app but I will leave that explanation to rtweet, because that vignette is very very helpful.

With those secrets and the rtweet package you can create a token that enables you to post to twitter.

And it is seriously as easy as:

4 Throw it all into a docker container

I want to post this every day but to make it run in the cloud it would be nice if R and the code would be nicely packed together. That is where docker comes in, you can define what packages you want and a mini operating system is created that will run for everyone on ever computer (if they have docker). The whole example script and docker file can be found here on github.

And that’s it. If you have suggestions on how to run it every day in the cloud for cheap, let me know by twitter or by opening an issue on github.

Things that could be done better:

State of the machine