Recently I wanted to download all the transcripts of a podcast (600+ episodes). The transcripts are simple txt files so in a way I am not even ‘web’-scraping but just reading in 600 or so text files which is not really a big deal. I thought.

Also here is a picture I found of scraping. 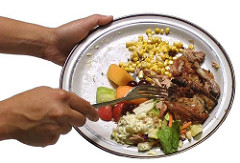 For every download you ask the server for a file and it returns the file (this is also how you normally browse the web btw, your browser requests the pages).

In general it is nice if you ask permission (I did, on twitter and the author was really nice! I recommend it!) and don’t push the website to its limit. The servers where these files are hosted are quite beefy and I will probably not even make a dent in them, when I’m downloading these files. But still, be gentle.

No really, be a responsible scraper and tell the website owners you are scraping (in person or by identifying in the header) and check if it is allowed

Here are some general guides:

There are multiple ways I could do this downloading: if I had used rvest to scrape a website I would have set a user-agent header^[a piece of information we snd with every request that describes who we are] and I would have used incremental backoff: when the server refuses a connection we would wait and retry again, if it still refuses we would wait twice as long and retry again etc.

However, since these are txt files I can just use read_lines^[This is the readr variant of readLines from base-R, it is much faster then the original] to read the txt file of a transcript and apply further work downstream.

This was my first approach:

Some episodes don’t exists or have no transcript (I didn’t know). Sometimes the internet connection didn’t want to work and just threw me out. Sometimes the server stopped my requests.

Getting more information to my eyeballs and pausing in between requests

Also I didn’t know where it failed. So I created a new function that also sometimes waited (to not overwhelm the server)

This one also failed, but more informatively, I now knew if it failed on a certain episode.

But ultimately, downloading files from the internet is a somewhat unpredictable process. And it is much easier to just first download all the files and read them in afterwards.

Also I wanted to let the logs show that I was the one doing the scraping and how to reach me if I was overwhelming the service.

Enter curl. Curl is a library that helps you download stuff, it is used by the httr package and is a wrapper around the c++ package with the same name, wrapped by Jeroen ‘c-plus-plus’ Ooms.

Since I ran this function a few times I downloaded some of the files, and didn’t really want to download every file again, so I also added a check to see if the file wasn’t already downloaded^[I thought that was really clever, didn’t you?] . And I wanted it to print to the screen, because I like moving text over the screen when I’m debugging.

I set the header (I think…) and I tell curl not to worry if it fails, we all need reassurance sometimes, but just to continue.

And the downloading begins:

So in general, don’t be a dick, ask permission and take it easy.

The final download approach works great! And it doesn’t matter if you stop it halfway. In the future you can see why I wanted all of these files.

I thought this would be the easy step, would the rest be even harder? Tune in next time!

Cool things that I could have done: