In this post we will start with a build-in dataset and some basic ggplot graphics. In the next post we will combine dplyr and ggplot to do awesome stuff with the Dutch University student counts from the previous lessons.

We will work with the build-in dataset mtcars.

There are many datasets in r library(help = "datasets") but in many examples online you will see the iris and mtcars examples. Find more information about the dataset with ?iris. As you can see it’s possible to include metadata about datasets in a package, so in the future you might want to share your data in the form of a package with all your code included.

But first back to the mtcars dataset and then to graphing (is that a word?).

According to ?mtcars: “The data was extracted from the 1974 Motor Trend US magazine, and comprises fuel consumption and 10 aspects of automobile design and performance for 32 automobiles (1973–74 models).”

The mtcars documentation gives us an example of displaying the mtcars information:

R has three plotting systems, each based on different ideas. The base plot system is very fast and is very useful for quick views of your data. But you need to tinker a lot to make plots nicer. Then there is the lattice system 1. Which is probably very useful, but I mostly use ggplot. For you ggplot might be THE reason to come to R.

To make the most of ggplot, and not go insane, you will need to understand the underlying principles. the gg in ggplot stand for the grammar of graphics. A concept based on the work of Wilkinson and Wills 2, and put into a graphics package by Hadley Wickham 3 (this is quite a good read). The most important thing to realize is this: 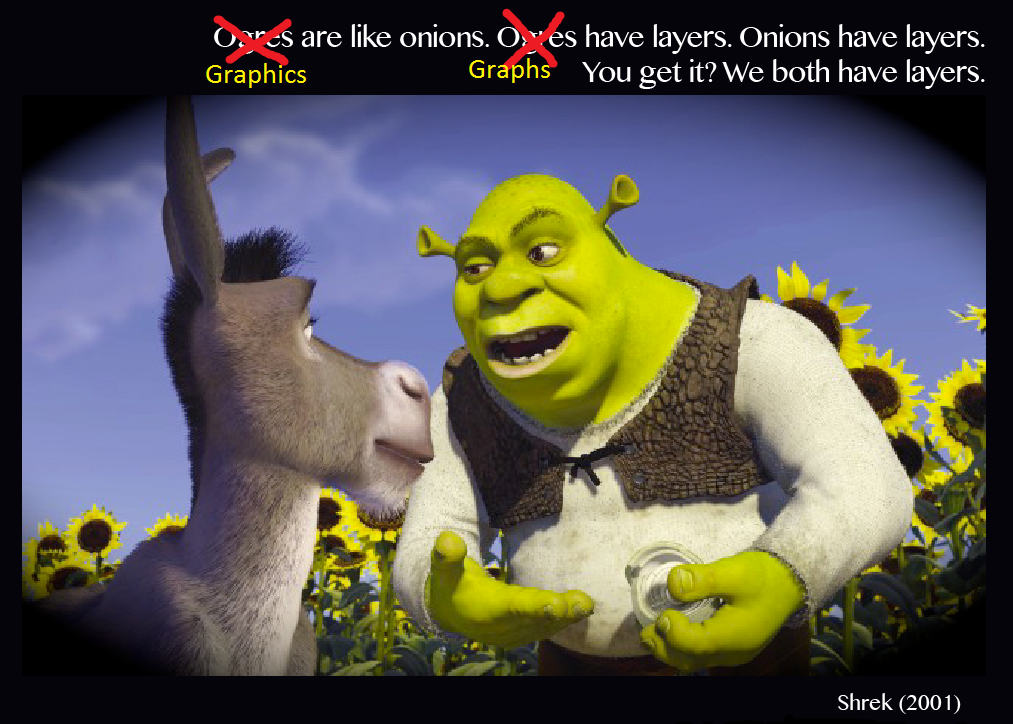 Every graph consists of the basic data, some transformations to axes, title information and the representation of the data. In ggplot you have to specify the data, and the aesthetics (some mapping of the position of x, and y, colours and shapes). Furthermore you have to tell ggplot what type of chart you want. Bars, lines, and points are all examples of geometric objects or geoms for short. 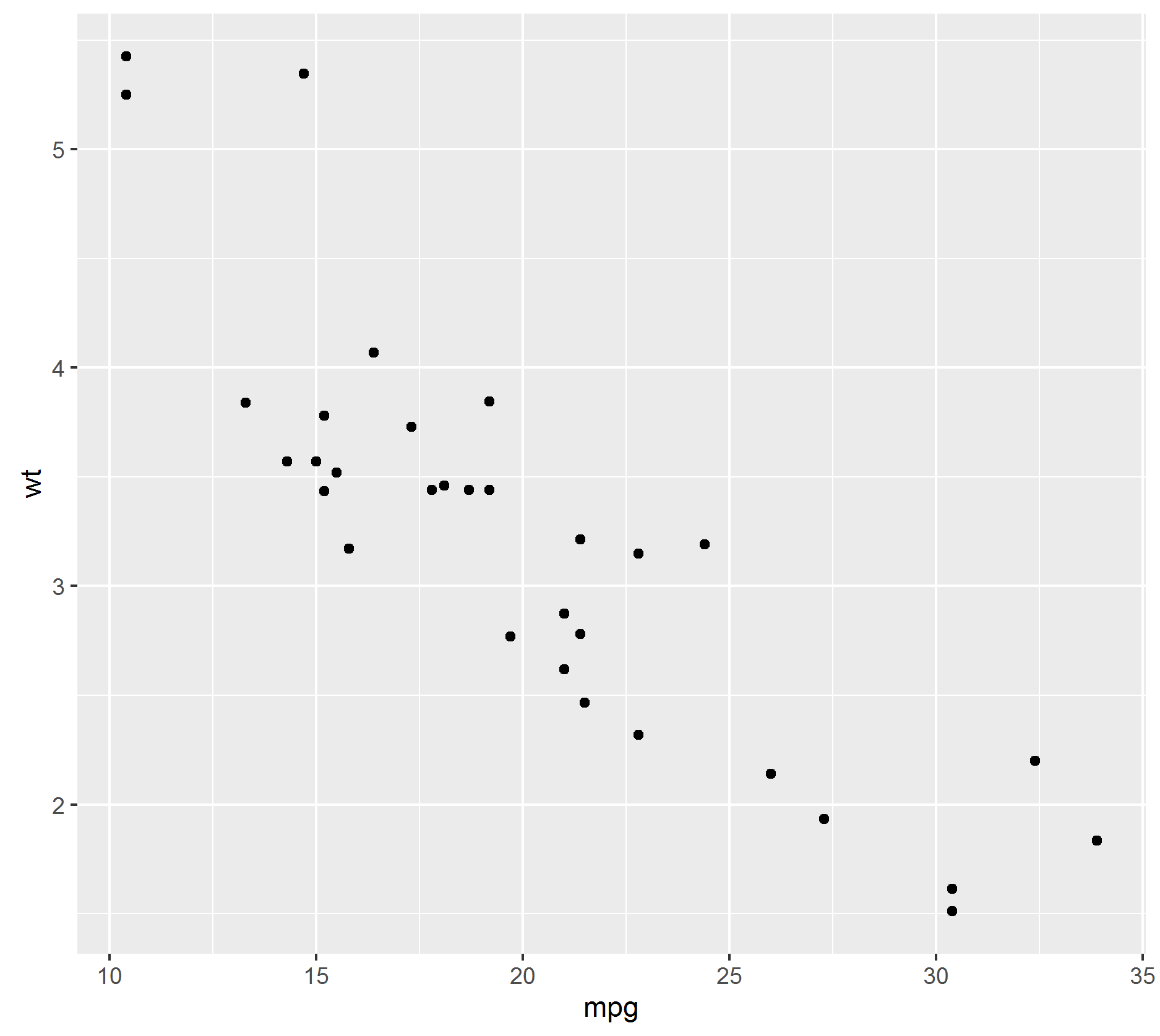 We called a ggplot element, specified the data, then the aesthetics so that miles per gallon (mpg) is on the x axis and weight (wt) on the Y axis.

We need to tell ggplot what kind of layer to put on top. In this case we’ve added points. Also note the + sign. In dplyr we used a pipe (%>%) operator to link stuff together, within ggplot we literally add layers together with the + sign.

Now we add some color

We’ve specified a color in the point layer. But much more effective is to use color as an extra dimension in your plots. 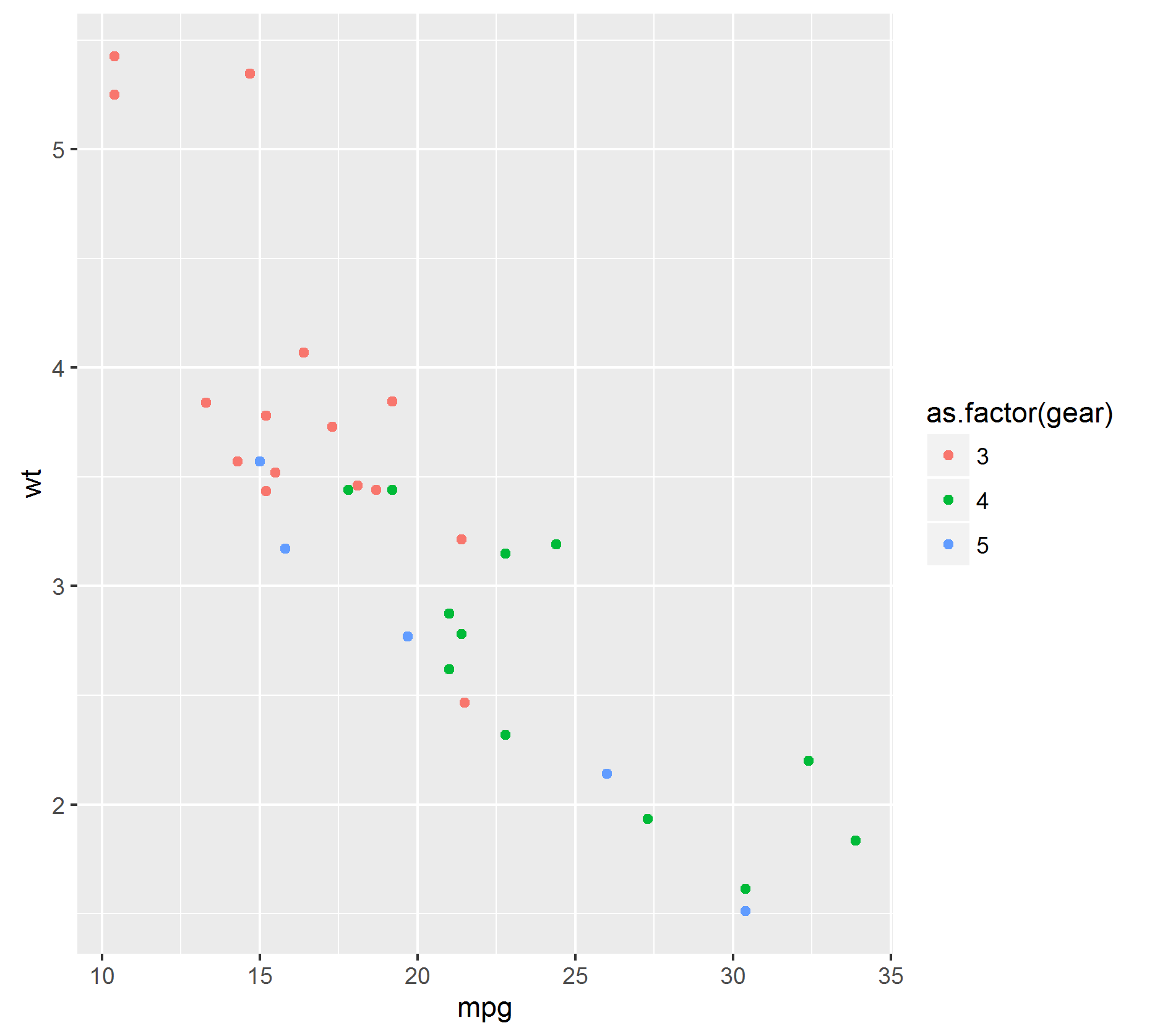 Now I told ggplot that gear was a factor. If your dataset is clean and nicely formatted you don’t have to do this. However this dataset has only numeric values, while some columns are actually factors.

For numeric variables, ggplot takes one color and changes the gradient from lowest to highest level of that variable. The colors for factor variables are maximaly distinct so you can identify groups easier.

You will have to think about the aes() command as something that depends on you data. A way to transform the variables from your data into graphic elements. But if you want to add a color or change the size of things that do not depend on your data, you must tell it seperately to the geom.

In this example there are three layers, a base layer, points and a smoothing on top of the points. As you add layers, each layer has their elements specified by you or inherits them from the base element ggplot(). In the above example geom_smooth() inherits the part [ aes(x, y) ] from ggplot(data = mtcars, aes(x= mpg, y= wt)).

This doesn’t work, because the smoothing geom doesn’t know what data or aes to use. But if we specify them, it will work.

We will work through a few more examples, but see Further reading for more examples of graph types and resources with lists and lists of plots and how to make them. 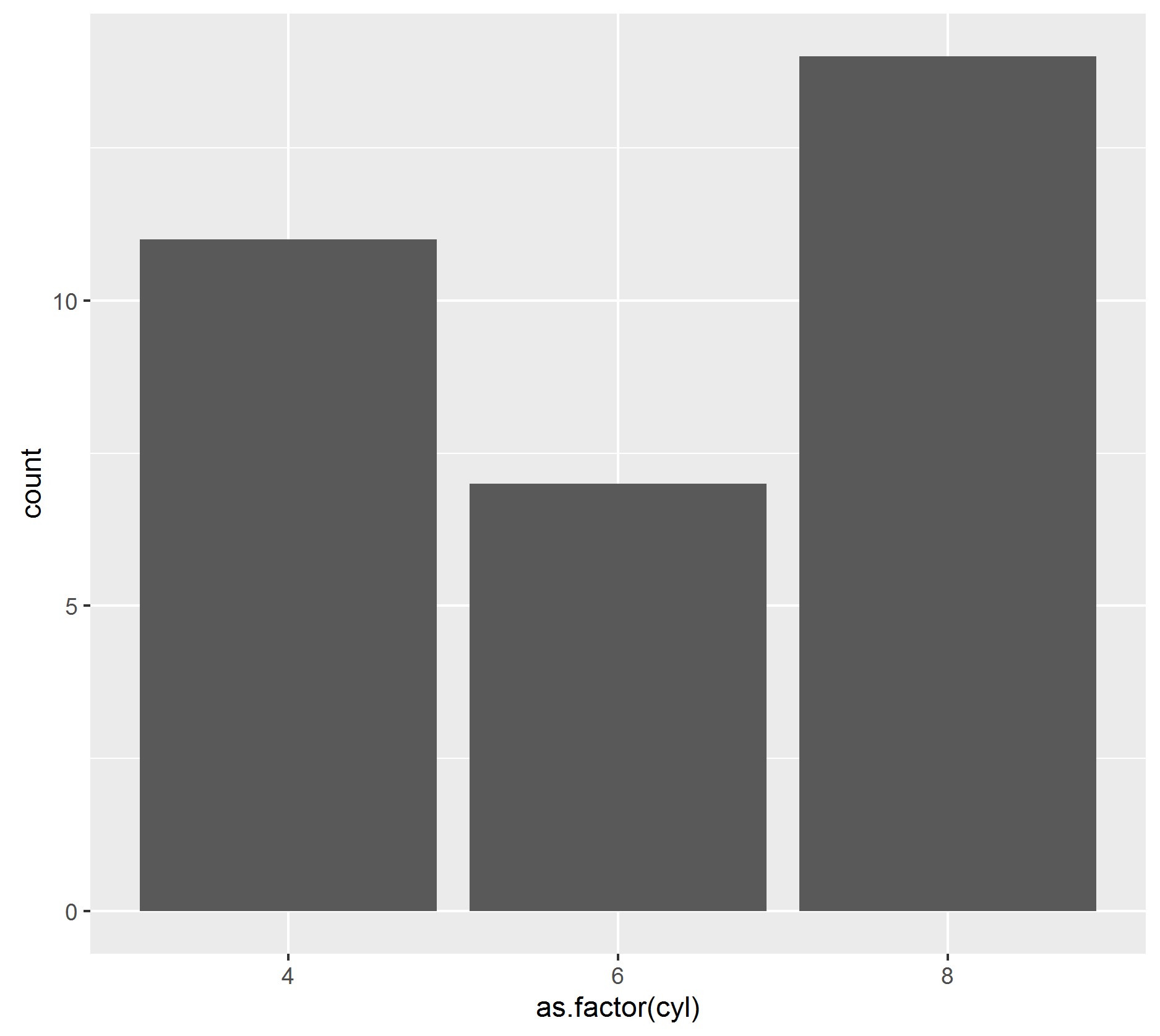 only the x aesthetic is specified, the geom is a bar (see ?geom_bar) and we specified that it should perform a statistic on the data. In this case it just counts the number of occurrences. But if your data is already in frequency you could use `geom_bar(stat = “identity”). For example 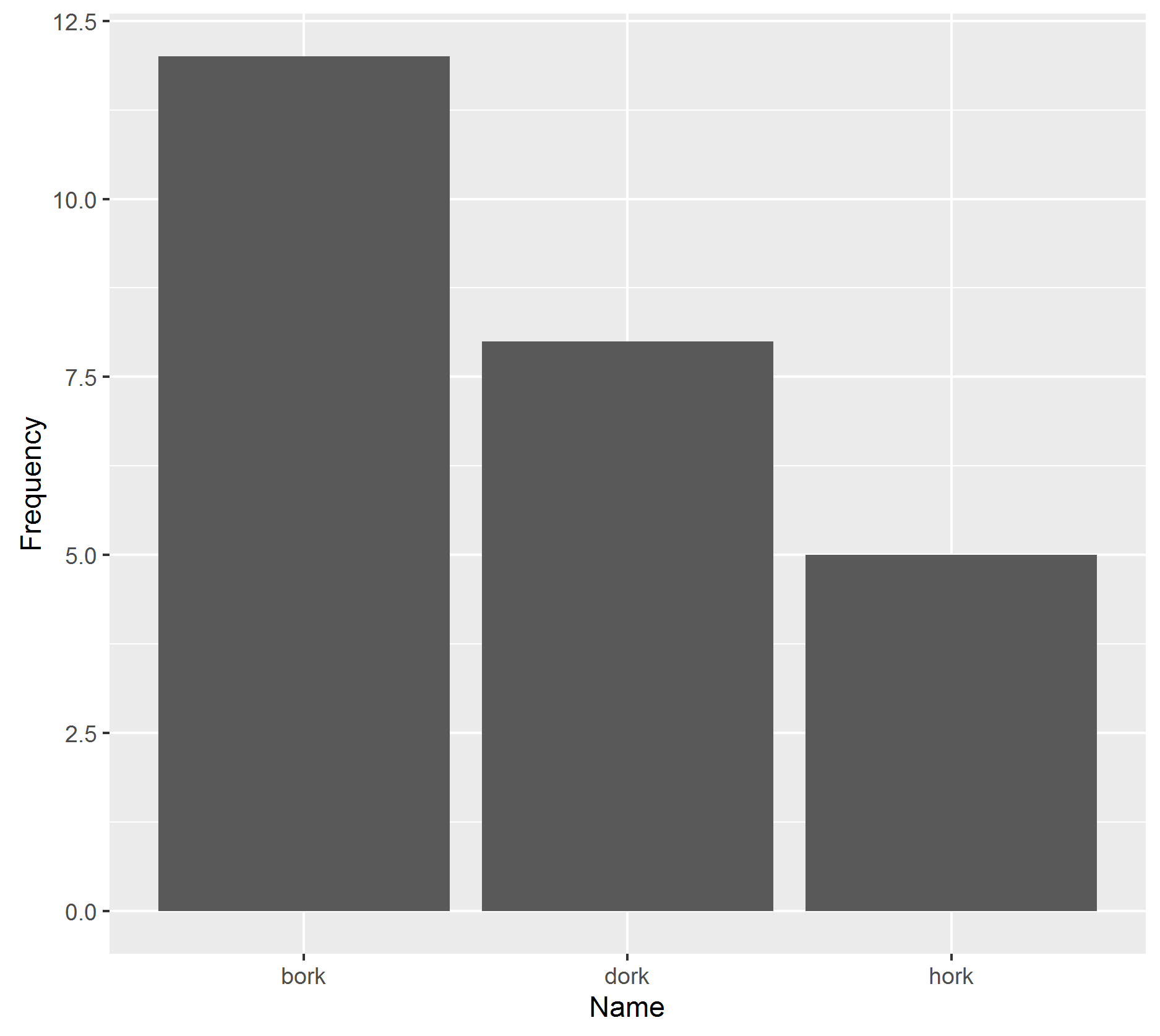 Example 3: boxplots, violingplots with points behind

Now a violinplot. The chickwts dataset is a small dataset of weights of chicks (baby chickens, not human ladies), with the diet they received.
By now you now the drill: the data is chickwts, the aes are feed and weight. Then we add a boxplot geom. See ?geom_boxplot for more info about changing parameters. I have displayed a violin plot, which displays more information about the underlying distribution. 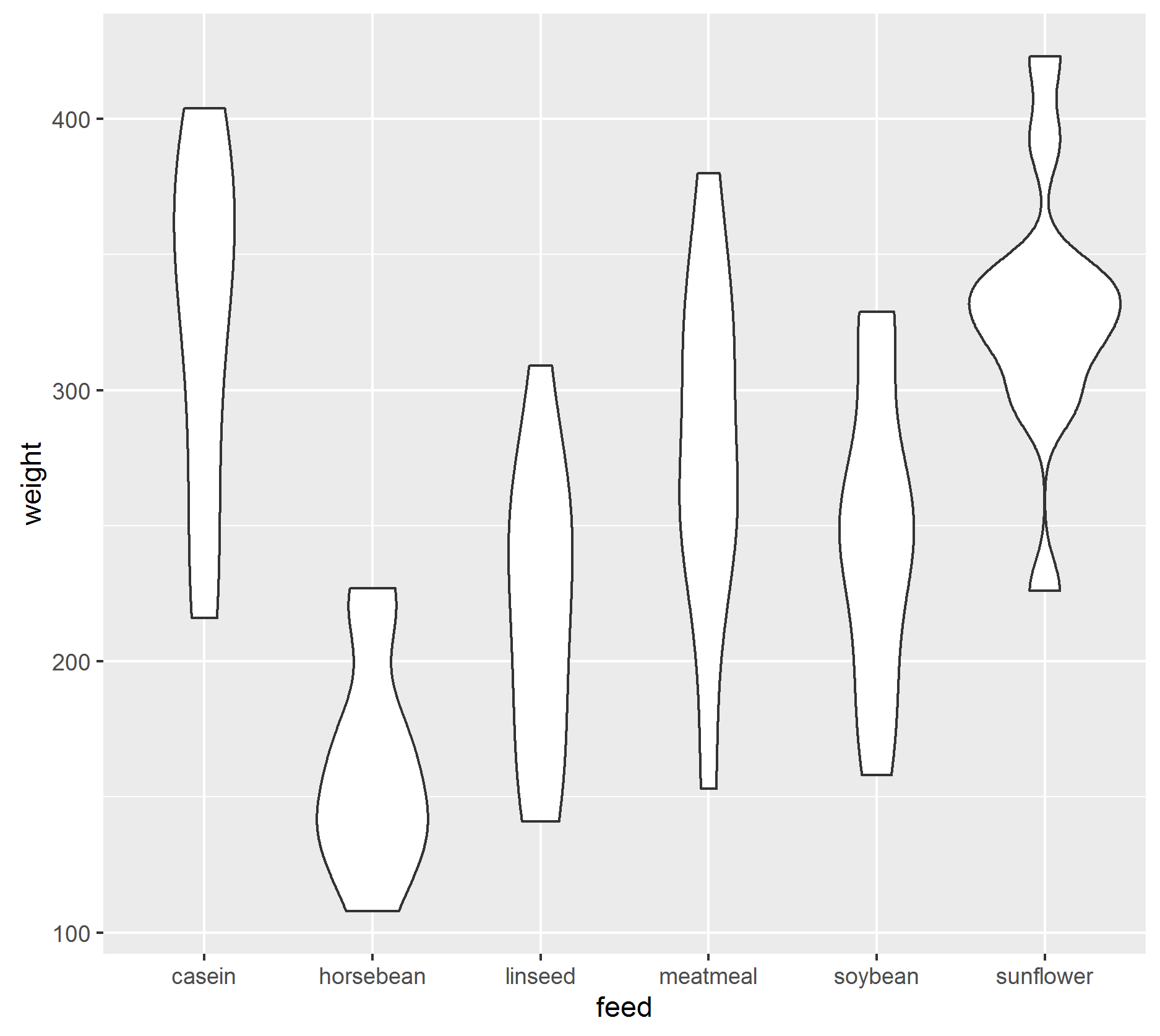 The jitter function adds some noise to points to separate the individual points. let’s combine and see what looks best 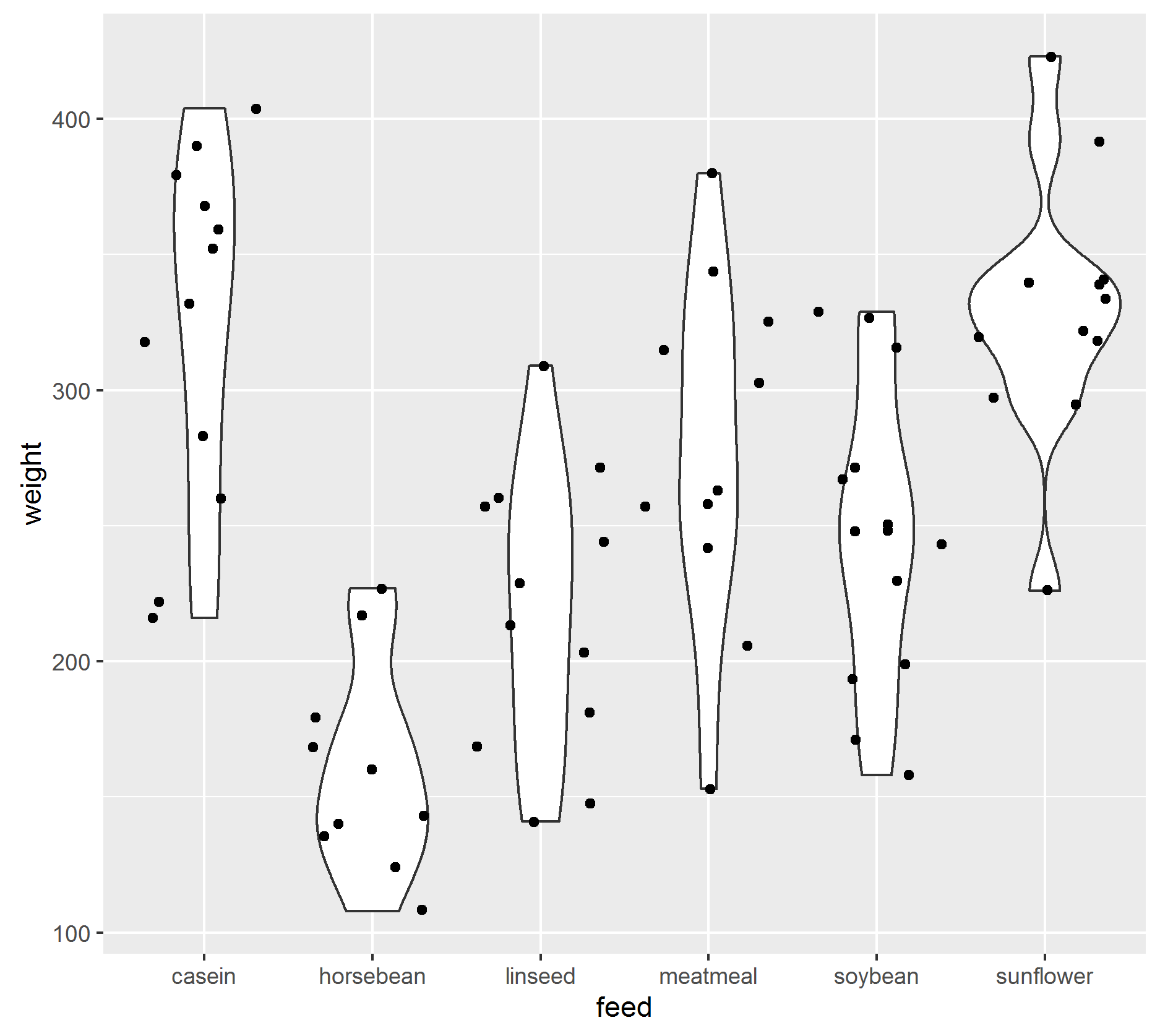 I like the last one best, but for different data different visualizations are better.

Most simple plots in ggplot2 look quite good from the start, it’s a credit to Hadley Wickham that he chose ggplot2’s defaults so well. However, there are many ways to custimize your plots. Every element can change colour4, shape, etc. But if you like to change things in multiple plots you should try to change the theme. Themes change multiple things at once. For instance:

It is relatively easy to change parts of themes, or to create a whole new theme. But quite easy is also the ggtheme package, see their website [5]. 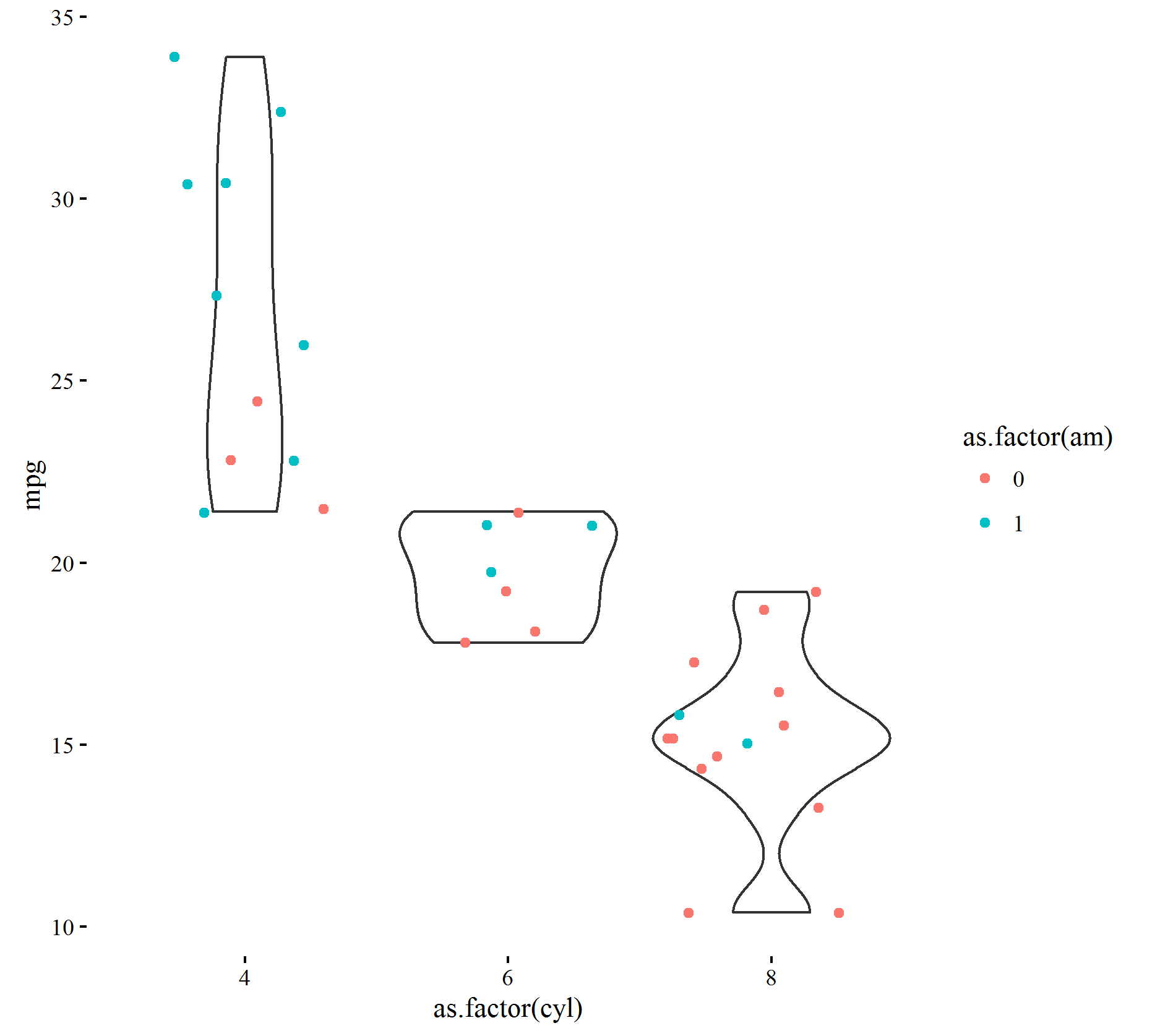 So now you know a few graphics and the basics of ggplot use. In the next lesson we will combine dplyr and ggplot to filter, slice and dice through a dataset. Hopefully we will get some insights!